Fans have been enjoying The Avengers for more than 50 years now, and they show their love for comic books, movies, and television series in many ways—most notably by buying official merchandise. If you are an avid fan, one of the must-have things in your collection is the Avengers: Infinity Quest pinball. It will immerse you in the world of The Avengers to join Captain America, Iron Man Thor, Black Widow, Hawkeye, The Incredible Hulk, along with the rest of the gang in defeating Thanos and his minions. If you already have the game, you may want to consider upgrading it with some Avengers Infinity Quest pinball mods for a more impressive elevated experience.

As Thanos is on a quest for intergalactic omnipotent power, your mission with The Avengers Infinity Quest is to hunt and recover all six Infinity Gems before he gets them. It is up to you to stop Thanos and the Black Order from succeeding. Pinball LED kits by Pin Stadium will enhance the experience of this action-packed game, so you can relive your favorite moments from The Avengers movies, TV series, and comic books you love.

Stern’s team of programmers, artists, engineers, and designers have worked together to recreate the universe known through The Avengers, bringing it to life through the incredible design, sounds, artwork, and visuals on the pinball machine. Avengers Infinity Quest pinball mods are a great way to update the look and feel of the machine. If you want the best set of pinball mods using LED lights, consider Pin Stadium’s premium pinball lighting for easy installation, which should take only around 10-15 minutes(no tools or skills required) on the machine.

About the pinball machine

The Avengers comic book universe has been a favorite since 1963. These days, the Avengers: Infinity Quest pinball machine is considered a must-have collector’s item, and it is available in Pro, Premium, and Limited Editions. All models feature an interactive spinning kinetic sling ring disc inspired by Dr. Strange. It comes with dual-direction velocity detection to help players open portals and begin quests to find the Infinity Gems.  The Limited Edition also known as the LE was limited to only 500 models sold out in the first week.

Limited and Premium edition models have the interactive Dr. Strange motorized pop-up disc scoop to transport pinballs to an underground Portal, which is a visible subway that can hold and stage up to three balls through translucent playfield windows underneath the playfield. These windows are accentuated with RGB lighting. These editions also have the custom sculpted Infinity Gauntlet, which comes with light-up gems, a Pym Laboratories vertical up-kicker, and a Captain Marvel inverse gravity custom wireform ramp.

Pinball LED kits are recommended if you want to avoid the guesswork involved in finding the necessary lighting and parts to enhance the playfield of the machine. Pin Stadium lights has a patent-pending design that is guaranteed to brighten the whole playfield, while adding a dramatic flair and outstanding effects to the Avengers: Infinity Quest pinball machine.

The lights ensure seamless integration for the pinball machine while maintaining a factory stealth appearance. With these Avengers Infinity Quest pinball mods, the game does not have to be dark or difficult to see. The lights can bring more life to the original artwork on the machine, making it come alive like never before.  The lights will remove dark spots, shadows, heavily reduce/remove glass glare, and increased ball visibility for precision shots during the most crucial moments to complete modes.

The Avengers Infinity Quest pinball mods from Pin Stadium are a must-have for purists looking to enhance or provide natural-looking illumination on the playfield. They are recommended for pinball modders looking for the right set of Pinball LED kits that can blow everyone away with their game. The mods are also ideal for operators looking to boost their ROI or traffic, distributors that want to add that extra edge and customer service enhancement option to the machines they sell to collectors, or to competitive pinball streamers and players looking to improve the visibility during their play.

Pin Stadium’s lights are easy to manage from the app, which can be installed on your smartphone or tablet. You can tell them what to do and how you want them to behave on your pinball machine with just a flick of your finger. This makes Pin Stadium LED kits the top choice of collectors when it comes to premium pinball lighting. 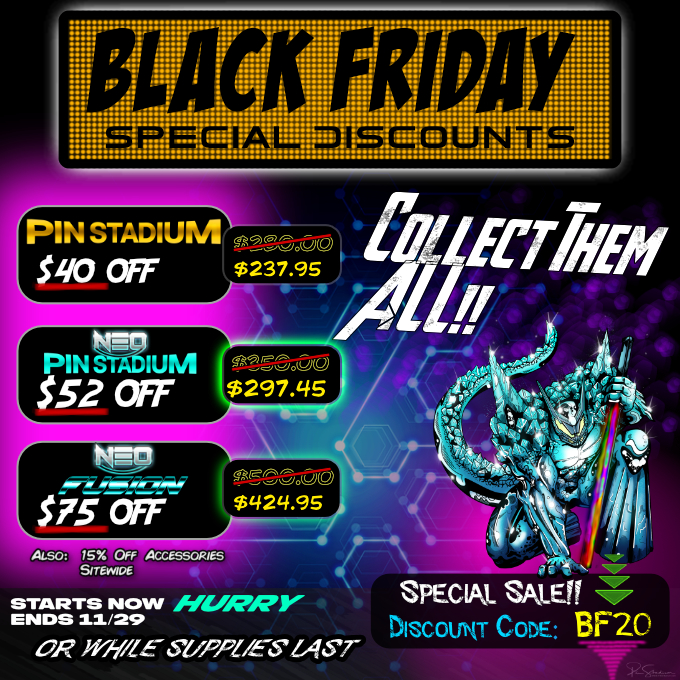